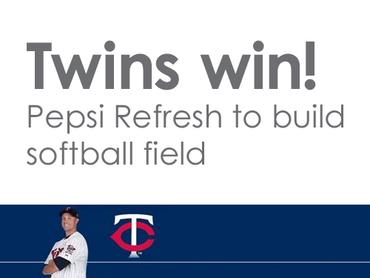 MINNEAPOLIS -- With the help of the Twins and the votes from the fans, the Courage Center's Rolling Twins youth softball wheelchair team will have a proper field to play on.

The team had been playing in the parking lot of a library because it didn't have the necessary funds to play on a true field. But that will all change, thanks to the Twins and the Pepsi Refresh Challenge.

With voting having concluded at midnight ET on Tuesday, the Twins were named the winners of the $200,000 grant that would go to the project of the organization's choice.

"It's a tremendous feeling, because those people are the real heroes," said Michael Cuddyer, the Twins player representative for the project, said. "I'm just grateful I'm in a position where I was able to help them."

The Twins finished on top after nearly two million people cast their votes, thus leading the other 14 teams that participated. Voting took place for five weeks, with fans being able to pick their favorites online or via text message.

Cuddyer urged fans to help the softball team in a video featured on the Pepsi Refresh Project page on MLB.com and often reminded and thanked fans for voting on his Twitter page. To see the idea become a reality is something special to him and the rest of the Twins organization.

"It doesn't matter if you're in a wheelchair or if you're running around the bases, you deserve to have actual bases to go around," Cuddyer said. "These kids are now going to be able to play on a real field rather than play in a parking lot. It's a place where they can call home now."

During the All-Star break, 15 teams pitched in their ideas, asking fans to help them make a difference in their communities through the Pepsi Refresh Project. The Project will award more than $20 million this year to fund various ideas that help impact the world through social good, and it teamed up with MLB to do so.

The 14 other teams that participated will each receive $5,000 to help fund their ideas. Fans can visit MLB.com/pepsirefresh for more information on all of the teams' ideas.