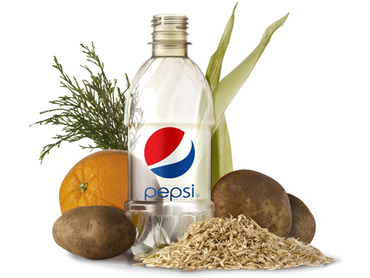 PURCHASE, N.Y. -- Building upon its heritage as an innovator and leader in environmental sustainability, PepsiCo (NYSE: PEP) today announced it has developed the world's first PET plastic bottle made entirely from plant-based, fully renewable resources, enabling the company to manufacture a beverage container with a significantly reduced carbon footprint.

PepsiCo's "green" bottle is 100 percent recyclable and far surpasses existing industry technologies. The bottle is made from bio-based raw materials, including switch grass, pine bark and corn husks. In the future, the company expects to broaden the renewable sources used to create the "green" bottle to include orange peels, potato peels, oat hulls and other agricultural byproducts from its foods business. This process further reinforces PepsiCo's "Power of One" advantage by driving a strategic beverage innovation via a food-based solution.

"This breakthrough innovation is a transformational development for PepsiCo and the beverage industry, and a direct result of our commitment to research and development," said PepsiCo Chairman and CEO, Indra Nooyi. "PepsiCo is in a unique position, as one of the world's largest food and beverage businesses, to ultimately source agricultural byproducts from our foods business to manufacture a more environmentally-preferable bottle for our beverages business – a sustainable business model that we believe brings to life the essence of Performance with Purpose."

Combining biological and chemical processes, PepsiCo has identified methods to create a molecular structure that is identical to petroleum-based PET (polyethylene terephthalate), which results in a bottle that looks, feels and protects its product identically to existing PET beverage containers.

PepsiCo will pilot production of the new bottle in 2012. Upon successful completion of the pilot, the company intends to move directly to full-scale commercialization.

"As You Sow applauds PepsiCo's innovative packaging design," said Conrad Mackerron, Senior Program Director of As You Sow, a San Francisco-based foundation, which promotes corporate social responsibility through shareholder engagement. "By reducing reliance on petroleum-based materials and using its own agricultural scraps as feedstock for new bottles, this advancement should deliver a double win for the environment and PepsiCo."

With this development, PepsiCo continues its leadership position in environmental sustainability and driving progress against the global goals and commitments it announced in 2010 to protect the Earth's natural resources through innovation and more efficient use of land, energy, water and packaging. Specific examples of PepsiCo's recent environmental innovations and progress include: