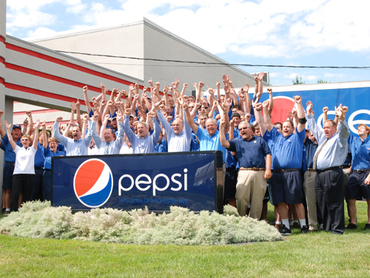 Purchase, N.Y. — (September 23, 2009) — Pepsi-Cola North America Beverages (PCNAB) has named the Gillette Group of Rochester, Minnesota, its Donald M. Kendall Bottler of the Year for 2008. Named for PepsiCo's former chairman and founder, this is the highest honor bestowed upon PCNAB's bottling partners.

Bottler of the Year finalists are nominated based on key criteria, including customer service, community support, volume and sales growth, quality standards and performance against the company's strategic imperatives.

A finalist for the Donald M. Kendall Bottler of the Year Award in 2004, Gillette Rochester was recognized this time around for the commanding share leads it has established within its territory across several retail channels as well as for its sustained excellence in service and merchandising.

"Gillette Rochester has proven itself a real winner year-in and year-out," Johnston said. "You only have to visit the Rochester area to see just what an impact this bottler has on its community. When you look at the numbers they’ve posted in large-format retailers, in convenience and gas stores and at foodservice, you're simply blown away. They truly deserve this honor."

In recognition of their generous support, Pepsi-Cola North America Beverages presents each finalist with a $5,000 Donald M. Kendall Community Grant. With that, Gillette Rochester has chosen to make a donation to the Shjon Podein Children's Foundation, an organization devoted to providing physical education activities for kids facing mental and physical obstacles.